Thursday and of the Fourth Week in Advent  Luke 1:57-79 – https://bible.usccb.org/bible/readings/122321.cfm  SET US FREE – HE CAN AND WILL! Have you ever taken your spiritual temperature? The thermometer I use is the thoughts that keep coming up in my head all day, even sometimes for days. Sometimes they are incredible and refreshing, even enjoyable. […]

Sunday 2nd Week of Advent Luke 3:1-6  THE DESERT  John the Baptist goes into the desert to find Jesus in you and in me. So, the desert really isn’t a dreadful thing, and that is if my heart remains a desert, waiting for Jesus. So, think of your daily life as a desert. Maybe look at your schedule and […]

by Delores Riley “That in the name of Jesus every knee should bow, of thosethat are in Heaven,on earth and under the earth:And that every tongue should confess thatthe Lord Jesus Christis in the glory of God the Father.” Philippians 2:10-11 Christ Himself speaks of his own kingly authority in his last discourse in reply […]

His Grace Pursues Us

Amanda Rose   Posted: 24 Sep 2012 11:02 PM PDT “God’s goodness is so gratuitous that it gives itself to creatures without any merit on their part; it is so liberal that it always precedes them and never fails to impart its light to them even when, by abusing their liberty, they show themselves […]

by Delores Riley Mother Marianne (formerly Barbara Cope) was born January 23, 1838 and baptized the following day in what is now Hessen, West Germany. She was the daughter of farmer, Peter Koob and Barbara Witzenbacher Koob, his second wife. Peter Koob’s first wife had nine children before she died, only two of whom reached […]

Blessed Mary Angela & My Personal Connection to Her

by Delores Riley Blessed Mary Angela, baptized as Sophia Camille, was born in Kalisz, Poland on May 16, 1825. Her parents, Joseph and Josephine Truszkowski were well educated, devout Catholics from noble families of the landed gentry. Sophia was a highly intelligent, generous, vivacious but frail child. She began her education at home under a […]

by Delores Riley St. Theodora Guerin was born Anne-Therese Guerin on October 2, 1798, in the village of Etables-sur-Mer in Brittany, France. Her parents were Laurent Guerin, an officer in the French Navy under Napoleon Bonaparte, and Isabelle Guerin, née Lefebvre. Laurent and Isabelle had four children, but only two, Anne-Therese and Marie-Jeanne, survived to […]

Why do the Stations of the Cross?

By Rich Gonzales The most important reason for reviving the practice of making the Stations of the Cross is that it is a powerful way to contemplate, and enter into, the mystery of Jesus’ gift of himself to us. It takes the reflection on the passion out of my head, and makes it an imaginative […] 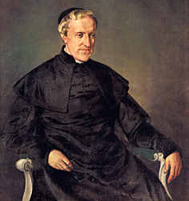 by Delores Riley Antonio Rosmini was born March 24, 1797, in Rovereto, a small city in the Trentino region of the Italian Tyrol. The ancient and illustrious lineage of Rosmini’s family is reflected in his full name, Antonio Rosmini-Serbati. Rosmini’s brilliance and piety were evident from his youth. He received early training in philosophy and […]